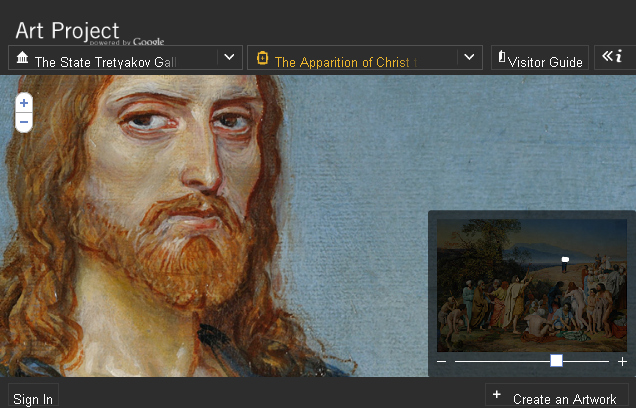 Google Art Project is an online compilation of high-resolution images of artworks from galleries worldwide, as well as a virtual tour of the galleries in which they are housed. The project was launched on 1 February 2011 by Google, and includes works in the Tate Gallery, London; the Metropolitan Museum of Art, New York City; and the Uffizi.
The "walk-through" feature of the project uses Google's Street View technology. The project includes 16 images over one gigapixel in size (over 1 billion pixels); the largest, Ivanov's The Appartition of Christ to the People, is over 12 gigapixels. By comparison, a typical digital camera takes pictures at 10 megapixels, or about 1000 times smaller in area.

It's taking forever to load.  When I can actually use it, I'll leave a comment about it!  But, if anyone has had some experience - tell me what you think.