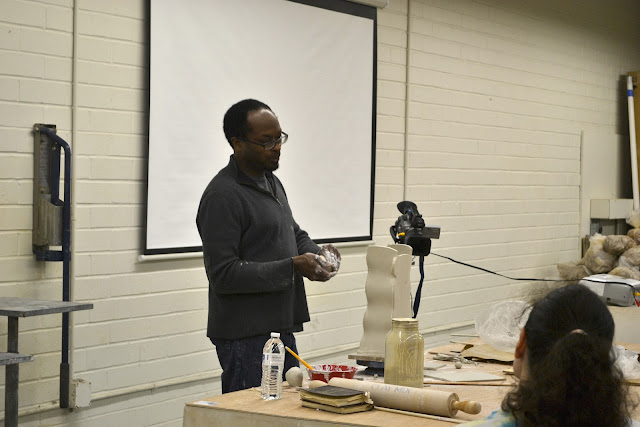 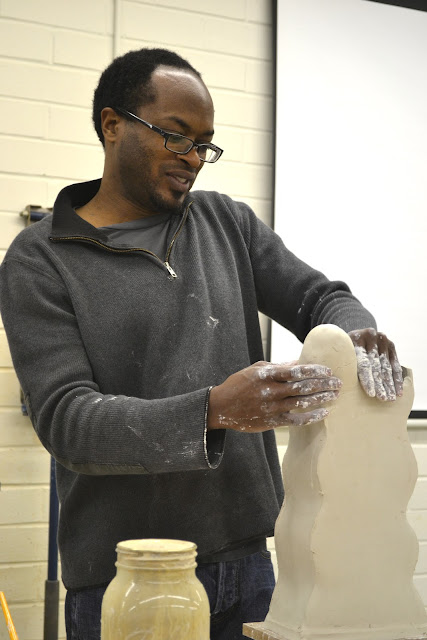 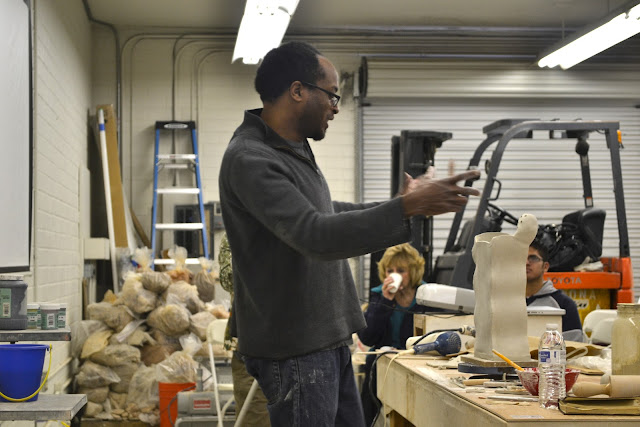 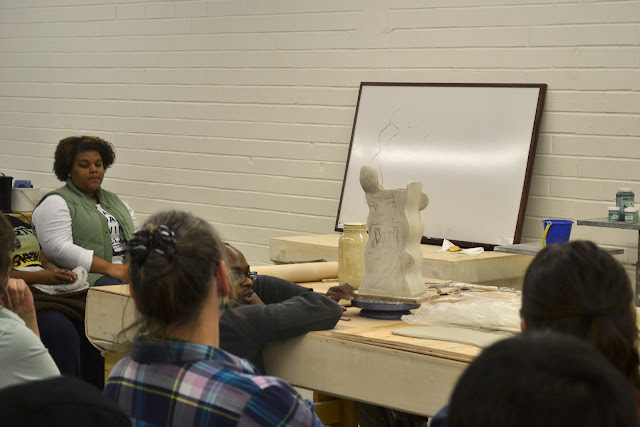 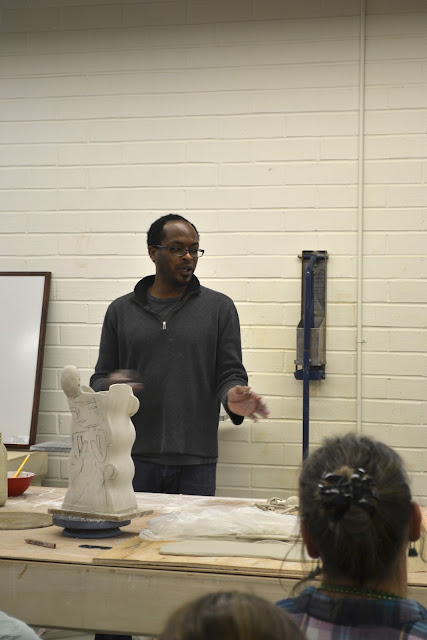 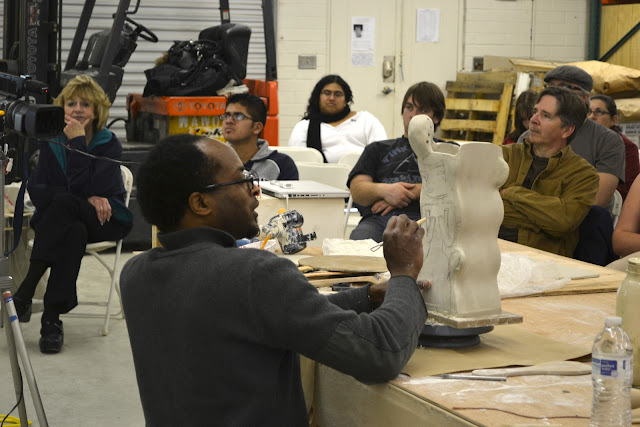 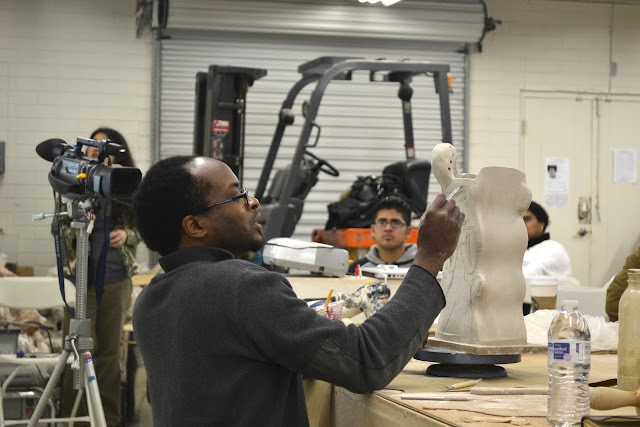 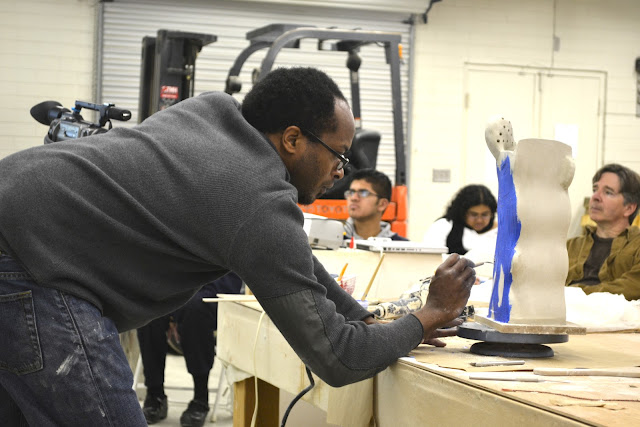 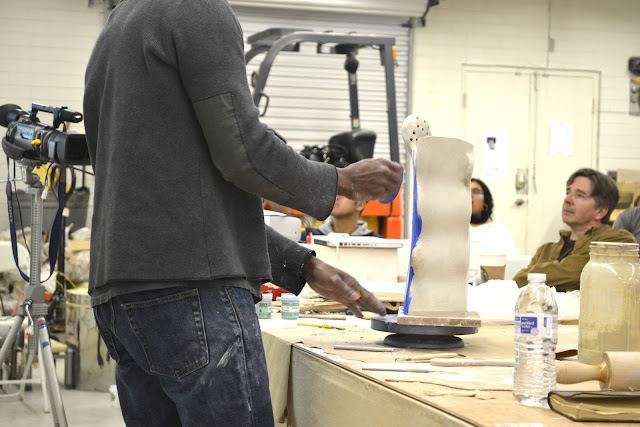 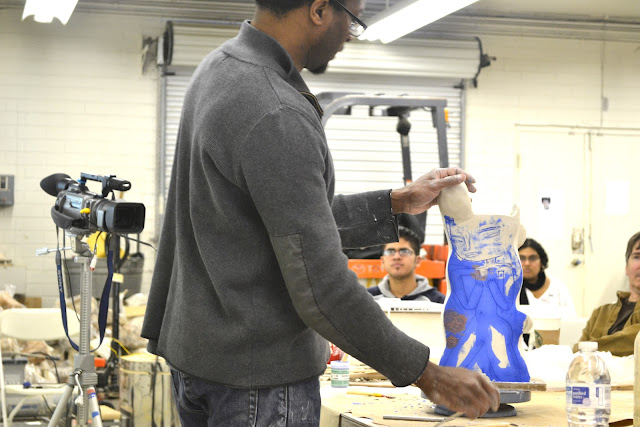 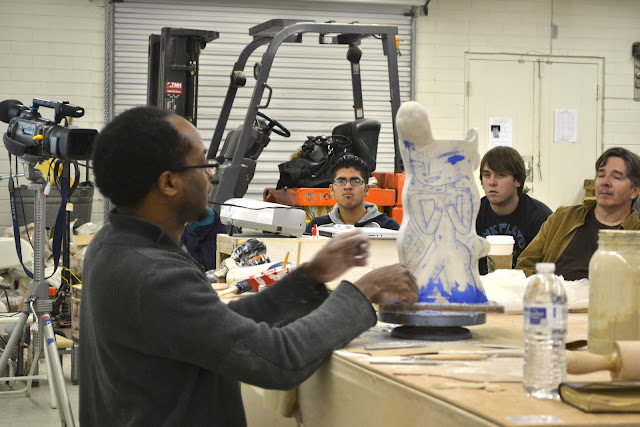 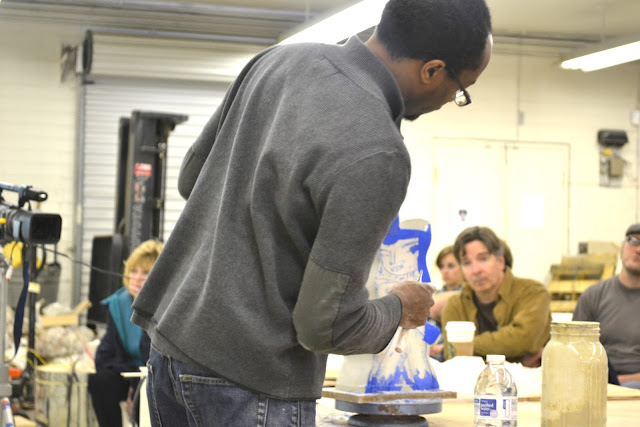 Kevin uses a porcelain clay (mostly one he makes) however, when he does use a commercial clay he chooses a cone 5/6 groggy porcelain body.  He is a hand builder the process he uses to construct his form is pretty basic.  I mean that he cuts the shape, uses a dowel to help get the slabs in position to be able to put them together - he bevels the edges, scores, slips and then reinforces the joints on the inside.

That's where it starts.  He did talk about how he spends a long time building the pieces and ensuring the integrity of the piece because he does spend so much time drawing/illustrating, he doesn't want to have seams splitting or cracking.  So, diligence is the word on that.

In a workshop setting it's hard to actually build like you would in studio because there simply isn't the luxury of time.  So, you can imagine the process of Kevin trying to show, with porcelain, the sped up version.  The truth is he couldn't.  But, he could talk about it.  He spends a lot of time on the details of building the piece and he spends even more time cleaning up the piece.

There was a lot of discussion about whether the drawing he may be thinking about in his head (which may not be fully realised) dictates the piece as he builds or visa-versa.  I think part of the answer is it's so much like a left brain/right brain commentary.  One simply cannot function at it's best without the other, but at different parts of the process one is in the forefront and then the other - of course, artists understand this relationship.  I think if you illustrate or decorate your work and have a fairly involved process in that regard - this is something that will make perfect sense.  However, it's not that easy to put to words.  He said that he often will simply focus on the construction and not spend much time on the story until the piece is ready for decorating.  It's often then that he will reproach the piece with the idea in mind of finding the story in the piece.  Michelangelo-esque; find the sculpture in the block of stone, find the idea in the shape and form.

Kevin did talk about how he uses Speedball Underglazes.  He uses Amaco underglaze, but likes and uses Speedball.  For the purposes of the workshop, he used Amaco.  He draws with a pencil an outline and get's the basic idea and lines correct of the figures and then he carves them.  He uses the basic mishima technique.  The decorating process happens at late leather hard.  He will paint on the colour , then draw some more illustration in the background to the figure and paint in another colour and so on.  He then uses a metal rib to scrape it off.  He told us that the drawing piece is lengthy.  It can take him sometimes 4 weeks to finish a drawing on the piece.  His approach is a very organic one and he does not force the narrative but allows himself the time for the story to fully emerge.

A word about his glaze.  I asked him specifically about his surface.  It's a glaze he has developed over a long period working hard to perfect.  It's his thing, and it's truly a beautiful surface.  He did tell us that it's super touchy and even a 10 degree difference or environment change can alter the results.

I'd say that Kevin has an architect's approach.  Attention to detail, clean, precise and then there's the story telling.  He is a master at it.   *We had to leave a bit early, so we missed some of the discussion about his surface technique.

I think the thing that is hard for me to convey is the experience of listening to him talk throughout the day, it makes a lot of his work, process, etc much more clear, it allowed a certain amount of reading between the lines.  As a hand builder, it was easier for me to relate to a lot of his thoughts and approach from that perspective.  In only spending some hours with him, we just got to skim the surface of his depth of narrative.  I think that's a long conversation. . .


It was really interesting for me as a hand builder.
Of course, I am doing little justice to Kevin, his work or his discussion.  It was a great opportunity.