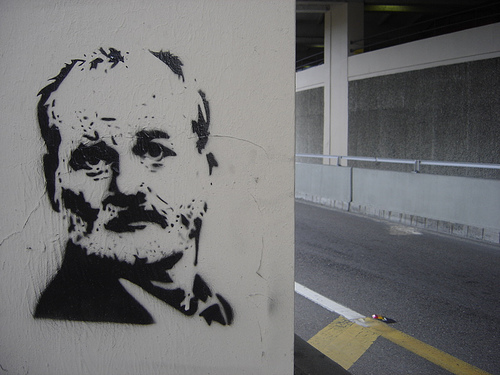 Zoological data suggests that groundhogs have a average lifespan of 10 years in captivity and 6 years in the wild, with a maximum lifespan of 14 years in captivity documented.[3]Punxsutawney Phil fans say that there is only one Phil (all the other groundhog weathermen are impostors), and that he has made weather prognostications for over 121 years as of 2011. They say that every summer, Phil is fed a sip of the mysterious Groundhog Punch, which magically lengthens his life for seven years. This is done by Inner Circle members.[4] According to the Groundhog Club, Phil, after making the prediction, speaks to the Club President in "Groundhogese", which only the Inner Circle appear to understand, and then his prediction is translated for the entire world.

how's that for creative, eh?

...oh  and yeah, it may be my birthday, but I'm not part of the "inner circle" and I don't drink any groundhog punch - all sounding a tad bit druid-y.
Posted by Linda Fahey